Did you know that educator and civil rights leader Mary McLeod Bethune founded Bethune-Cookman University and was an advisor to Franklin D. Roosevelt? Dubbed “The First Lady of The Struggle” because of her commitment to the racial advancements of African Americans, Bethune started the school for African-American students in Daytona Beach, Florida. 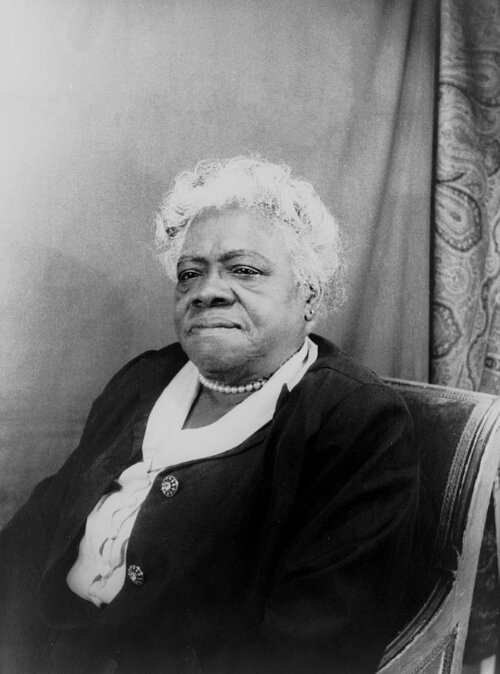 Mary Jane McLeod was born in Mayesville, South Carolina on July 10, 1875 to Samuel and Patsy McIntosh McLeod, both former slaves, . Although she began working in cotton and rice fields at the age of five, she demonstrated an early interest in her education. Bethune’s teacher, Emma Jane Wilson, helped her obtained a scholarship to attend Scotia Seminary from 1888-1893. After graduating from the seminary, she went to the Dwight Moody’s Institute for Home and Foreign Missions in Chicago with hopes of becoming a missionary in Africa. Bethune decided to be a teacher when that dream didn’t materialize. In 1904, she started the Daytona Normal and Industrial Institute for African-American girls. The school started out with only five students (four girls and her son), but the institute grew to more than 250 students over the first few years.

Mary married fellow teacher Albertus Bethune in 1898. The couple had one son—Albert McLeod Bethune—before separating nine years later. However, she remained married until his death in 1918.

Bethune served as the president for the Daytona Normal and Industrial Institute and she remained its leader even after it was combined with the Cookman Institute for Men in 1923 (some sources say 1929); becoming the Bethune-Cookman College. The college was one of the few places that African-American students could pursue a college degree. Bethune stayed with the college until 1942.

Additional to her work in education, Bethune contributed largely to American society. She served as the Florida chapter president of the National Association of Colored Women for many years. In 1924, she became the organization’s national leader, beating out fellow reformer Ida B. Wells for the top position.

Bethune also became involved in government service, lending her expertise to several presidents. President Calvin Coolidge invited her to participate at a conference on child welfare. For President Herbert Hoover, she served on the Commission on Home Building and Home Ownership and was appointed to a child health committee. However, her most significant public service roles were with President Franklin D. Roosevelt.

By 1935, Bethune became a special advisor to President Roosevelt on minority affairs. That same year, she also began the civil rights organization, the National Council of Negro Women, which was created to represent numerous groups working on critical issues on behalf of African-American women. President Roosevelt gave her an another appointment the following year. In 1936, she became the director of the Division of Negro Affairs of the National Youth Administration. One of her main  concerns was helping young people find job opportunities. In addition to her official Roosevelt administration role, Bethune became a trusted friend and adviser to both the president and his wife, Eleanor Roosevelt.

Bethune spent much of the rest of her life devoted to social causes after leaving Bethune-Cookman College in 1942. She took up residence in Washington, D.C., at the National Council of Negro Women headquarters in 1943 and lived there for several years. As an early member of the National Association for the Advancement of Colored People (NAACP), along with W.E.B. DuBois, she helped represent the group at the 1945 conference that founded the United Nations. In the early 1950s, President Harry Truman appointed her to a committee on national defense and appointed her to serve as an official delegate to a presidential inauguration in Liberia.

Eventually, Mary Mcleod Bethune returned to Florida to retire and then died on May 18, 1955, in Daytona.

Bethune’s legacy advanced the rights of both African Americans and women in early 20th century America. Yet, her renowned dedication to education of African-Americans was highly important in the black community. Before her death, Bethune penned “My Last Will and Testament,” which served as a reflection on her life and legacy in addition to addressing a few estate matters.

What’s in a Name that Which We Call a Rose?

Daily news and entertainment for African-Americans. Your one stop for all things Black America.

where would-be writer works with words

United and alone in the world

How to be a Heartbreaker

There's this fat girl who parks her fat ass in every girl's big panties sooner or later. Let's find out how she changes ,and I imply both literally and figuratively when I say-the dimensions when she stomps her fat foot in our lives.

I am a lover of perseverance. I am folklore. I am consistency and contradiction.